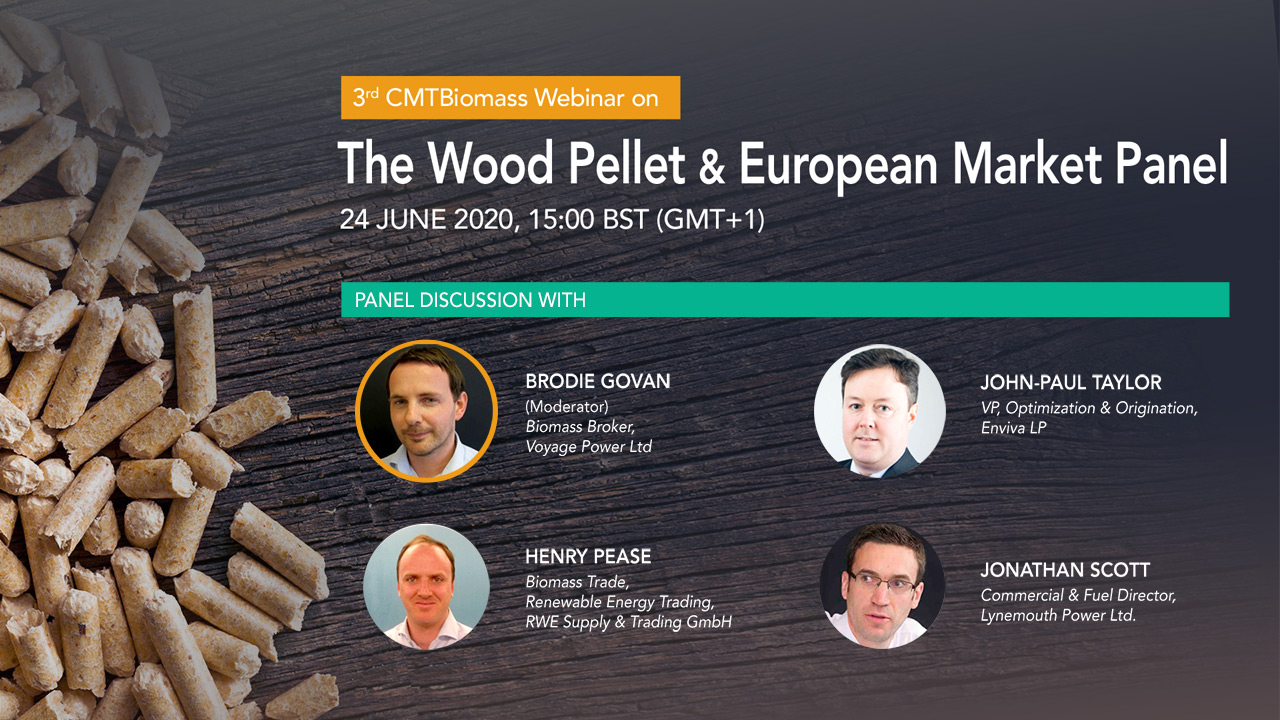 The full extent of the Covid impact has not been fully realised but the current outlook is that while disruption on the supply side is so far limited, the lack of industry in Europe and subsequent effect on power prices has led to lower biomass power and heat generation. Spot wood pellet pricing has almost halved on a year-on-year basis and supply seems plentiful. The future of many projects on both the supply and demand side is uncertain with the on-set of a global recession on the horizon.

Join us at this CMTBiomass webinar for expert analysis from three of the most active market participants who will try to make sense of these unprecedented times and provide insight into what it means for biomass now and in the future.  We have all angles covered with the world’s largest wood pellet producer, one of the most active consumers and traders alongside a key European utility.

- COVID-19 and its impact on supply, trading and generation
- Analysis of the European energy landscape and what it means for biomass
- Discussion on supply vs demand now and in years ahead
- Future of European biomass in current climate

Brodie Govan currently runs biomass operations at Voyage Power. Prior to this he spent three years at PVM Environmental Products brokering physical and financial biomass business from the head office in London. He joined PVM from Argus, where he launched the Argus Bioss desk and created and managed the weekly market report and index for five years. Before this, he spent two years at Brewin Dolphin Securities' trading division. Following spells as a reporter for a local newspaper in the US state of Missouri and at Scotsman Publications in Edinburgh, Brodie spent time as a foreign correspondent in Southeast Asia covering business, trade and travel news.

John-Paul (JP) Taylor is the Senior Vice President of Optimization and Origination at Enviva, the world’s largest producer of sustainable wood pellets. Over the course of his career, JP has developed an acute acumen for market analysis with a focus on renewable energy. Since joining Enviva in 2014, JP has evaluated and developed opportunities to optimize and monetize capital-light margin expansion initiatives, developed strategies to leverage Enviva’s infrastructure to provide value to other participants in the wood pellet sector, analyzed the broader market at large, and has deployed customized logistical solutions for customers to continually improve the Enviva value chain. Furthermore, he has been instrumental in developing new markets in Asia and manages contractual processes as they relate to executing new long-term offtake agreements which underpin the infrastructure development of the company. Prior to joining Enviva, JP was Vice President of Biomass Brokerage at New York-based Evolution Markets, where he developed and grew the company’s biomass business. JP holds a bachelor of commerce degree and a master of international economics and finance from Ryerson University in Toronto.

Henry Pease currently works in RWE Supply & Trading’s biofuels trading team. He has extensive experience of sourcing biomass from North America and Europe, including demonstrating the sustainability of the supply chain. He has worked closely on co-firing biomass at the Amer & Eemshaven Power Stations in Holland, as well as the conversion of Tilbury and Lynemouth Power Stations from coal to biomass in the UK. He has developed new biomass supply markets including residential heat in Europe and industrial demand in Asia. Prior to joining RWE Henry developed and raised funding for a biomass CHP and wood pellet plant in Belgium. He has an MBA from the University of Virginia and a BSc from University College London.

Jonathan Scott is Lynemouth Power’s Commercial & Fuel Director since January 2020.  He has been involved in the project at Lynemouth since its inception, responsibilities include management fuel supply and logistics for Lynemouth, Contract for Difference, Sustainability compliance, and commercial optimisation.
Prior to Lynemouth Power, Jonathan held similar management roles at Rio Tinto Alcan in the UK, managing fuel and energy relationships for Lynemouth Power Station, Lynemouth Smelter and assets in Fort William.

Do register anyway to purchase the event recording, available after the live streaming.