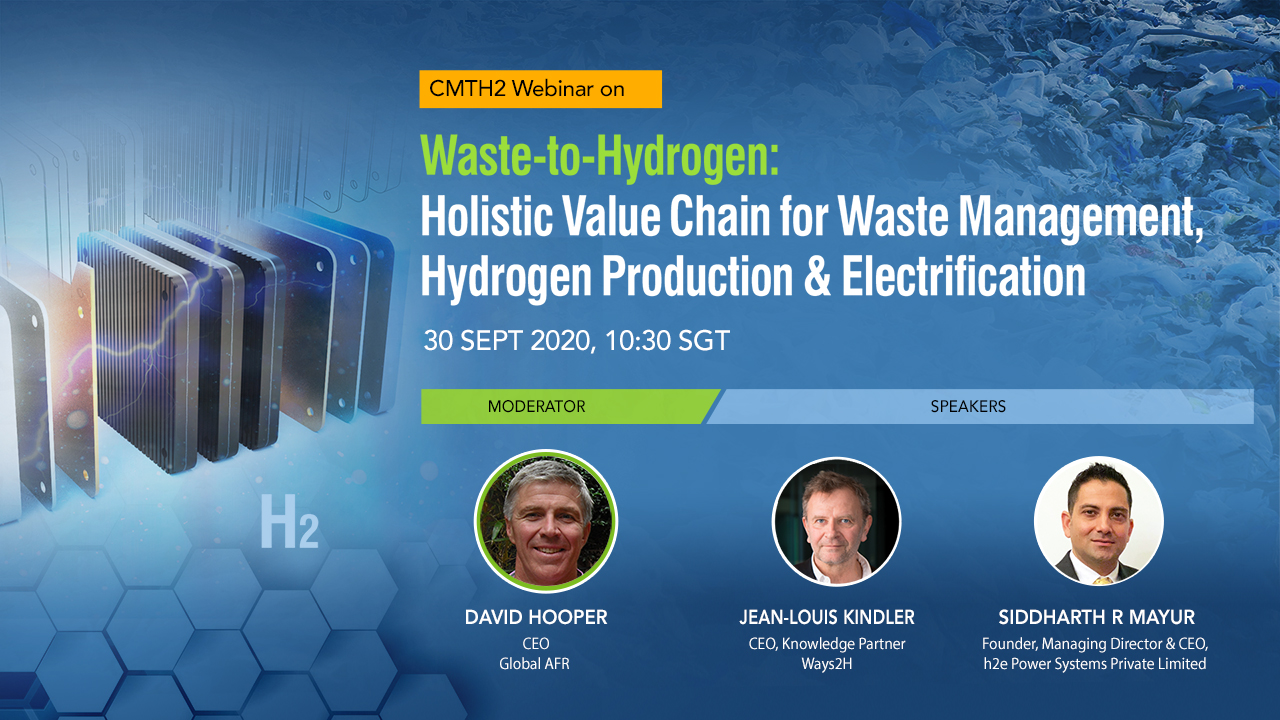 “Waste to Hydrogen”, and the webinar focuses on the development of a holistic value chain for Waste to Hydrogen & Electrification.  The synergy between Ways2H and Pune-based h2e aims to focuses on waste treatment solution, an endemic problem in India, to hydrogen and electricity (through microgrids and decentralized solutions), that will provide electrification solutions for remote communities, in India and Asia.

Pairing the possibilities together, join us at this 75-minutes #CMTH2 webinar for experts analysis and insights on hydrogen production and electrification from waste.

Join us for our webinar where we discuss about Waste-to-Hydrogen: Holistic Value Chain for Waste Management, Hydrogen Production & Electrification, 30 September 2020, 10:30 SGT.

David Hooper  is CEO of Singaporean based Global AFR which brings together a team of waste professionals to develop Waste to Energy (EfW) facilities at the centre of an Eco-Industrial Park (EIP) to maximise resource recovery and related manufacturing in SE Asia and Oceania. The EfW facility provides energy generation and this energy in the form of electricity and heat, is distributed through an embedded grid to other businesses within the EIP: some of which will be developed by Global AFR and can include plastics recovery, in-vessel composting, ash treatment recycling etc and other environmental technologies currently either coming to market or in development.

A Chartered Civil Engineer with an MSc in Engineering Management, a Fellow of the Institution of Wastes Management (CIWM) and has significant practical experience in design, operations, project and contract management. David currently sits on the CIWM Thermal Treatment Committee and several WMRR (Australia) EfW committees.  David has taken many different waste management facilities from conception through to operation around the world since 1991 and provided advise to the full suite of stakeholders in such projects.  David has worked in all 6 habitable continents on various waste management projects.


Jean-Louis Kindler is CEO of Ways2H, a leading commercial provider of Waste-to-Hydrogen solutions for mobility and grid applications. A veteran of the environmental technology industry who has pioneered award-winning water, waste and renewable energy systems, Jean-Louis and his team are developing projects that transform the world’s worst waste - MSW, plastics, medical refuse - into clean energy and fuel.

Jean-Louis is also Co-Founder and CEO of cleantech management company Clean Energy Enterprises, which created Ways2H as a joint venture with Japan Blue Energy Corp. Previously, Jean-Louis was president of OriginClear Inc.’s Technology Division, a leading provider of water treatment solutions, where he led commercial development of a breakthrough water treatment technology. Jean-Louis is still a member of OriginClear’s board of directors. Before joining OriginClear, Jean-Louis was co-founder and chief technology officer of Ennesys, an award-winning French biotech company, where he designed an innovative waste-to-energy system and hosted French President François Hollande during a 2013 state visit to the company.

Jean-Louis earlier served as founding CEO of MHS Equipment, a French nanotechnologies equipment manufacturer, where he led the development of a new fuel cell components manufacturing process. Jean-Louis started his 30-year career in the cleantech sector in Japan, as principal of technology incubator Pacific Junction. His work there included technology sourcing for the French industrial group GEC-Alsthom, building the first version of the BLUE Tower waste-to-hydrogen commercial unit, and providing market development for a fluids-mixing technology.

Jean-Louis holds a Master’s degree in Economics and Public Policy from the Institute of Political Studies (Institut d'Etudes Politiques de Lyon) in Lyon, France, and an MBA in International Management from the ISG Business School (Institut Supérieur de Gestion) in Paris.

Driven  by  the  goal  to  bring  energy  independence  in  every  sphere  of  life,  Mr.  Mayur incorporatedHydrogen, Fuel Cells and batteries as the core technology strategyto fulfilhis visionand developed a solutions based approach that involved SOFC / SOEC, Salt batteries & BioFuels. Under technology license from Fraunhofer IKTS, Germany, h2e Power Systems is setting up a state-of-the-art manufacturing facility for Fuel Cells and Batteries in India.

To be an enabler to the Hydrogen economy, Mr. Mayur has set up mPower GmbH in Germany to manufacture and market the fuel cell stack modules to integrators all over theworld. These stacks are capable of producing electricity from different fuel inputs and in the reverse mode produce green hydrogen, syngas and ammonia.

Mr. Mayur hopes to help covert a farm into a factory thus creating a very high social impact at the bottom of the pyramid. Through continued innovation & localization Mr. Mayur’s h2e is laying the foundation to build a world class & built to last Fuel Cell company in India. Mr. Mayur believes h2e Power Systems is an effective convergence of a Social Vision; German Engineering & Indian Entrepreneurship coupled with innovation at local levels which has laid the foundation to build a World Class Fuel Cell company that will play an important role in the energy transition towards the Hydrogen Economy.

Mr. Mayur also serves as the President of the Chess Association in his state of Maharashtra and has served in the past as a member of the Planning Commission of India’s committee to write the 12th5year plan for Education & Sports in India in 2014.

Do register anyway to purchase the event recording, available after the live streaming.

Ways2H™ is transforming the world's worst waste into on-demand clean fuel and electricity. It's a single solution to a double challenge: the $400 billion+ global solid waste market, and rapidly growing demand for clean hydrogen. Ways2H™ systems convert organic waste streams, including plastics, municipal waste and hazardous elements, into hydrogen. The systems are self-sustainable, scalable and with a modular footprint that makes them suitable for decentralized waste treatment and clean energy production, improving logistics for both the waste and energy industries.